The Aeronca LB is a bit of an unusual modeling subject not particularly well known. However, it’s a big part of the history of light planes in the mid-1930’s and deserves to be brought into the limelight. Our goal is to provide a lightweight Park Flyer that would provide very scale-like flying qualities using inexpensive readily available equipment. The model was designed in true scale outline and features scale rib spacing for the most scale appearance possible in a Park Flyer. A 450-class Outrunner motor provides power for the LB with simple 4-Channel control incorporating a Micro-servo for the rudder and elevator and one Micro-Servo for each aileron.

Construction is primarily of Balsa and Lite Ply and incorporates the typical Old School “Stick & Tissue” style of construction. The wingtips and tail section outlines are bowed from balsa for maximum strength and minimum weight. The wings are of the “egg crate” style of construction making assembly quick and accurate. The one-piece wing is removable by simply removing 2 bolts on the bottom of the fuselage.

Skip to the end of the images gallery 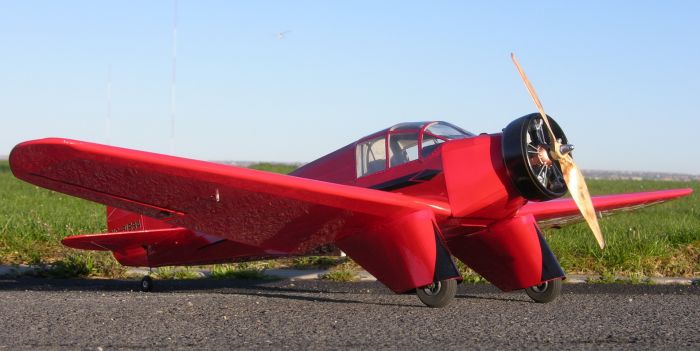 Skip to the beginning of the images gallery

The Aeronca L series private planes began in 1935. The “L” was a 2-seat low wing monoplane that was far removed from anything Aeronca had preciously offered. The “L” featured a cantilever wing, side-by-side seating with a fully enclosed cabin and was powered with radial engines ranging from 70–90 HP. Construction included a welded steel fuselage with wood wings, all covered in fabric. Close attention was paid to the aerodynamics and that the airplane was streamlined by way of large wing root fairings, fully enclosed fixed landing gear, and a speed ring to cowl the engine. Powered by an 85-horse-power LeBlond 5 cylinder radial engine, the Aeronca LB would cruise at just over 100 mph, and reach a top speed of just over 120-mph.

Flying Weight 22.5 oz. Laser cut shaped parts, standard wood, wire sizes, as well as a vac-formed radial engine. Also included are two full-sized plan sheets, Laser cut parts I.D. sheets, Pre-bent Main Landing Gear components, Assembly Instructions as well as a photo disc containing a number of construction photos to aid in assembling the model. Kit Includes DA-1028-19 Radial Engine
Other Items Required:
Select all:
Please note that phone orders should only be called in from 9am to 5pm EST. You may leave a message with voicemail after hours or e-mail us. Thank You!
Search